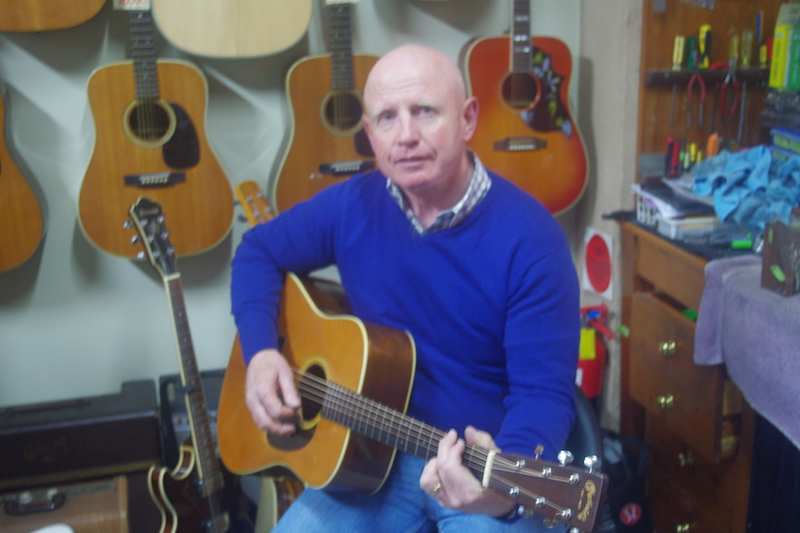 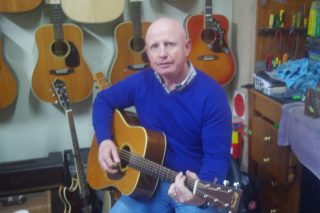 When in South Australia, earlier this year a friend and I stumbled across one of the finest music stores I have ever seen outside the USA. I was in Adelaide for the week between the Quorn Jam Camp and the Wirrina Bluegrass Festival weekends with my friend Ed Lowe from Western Australia. He and I had just completed hosting the jam camp in South Australia and were hanging around Adelaide, awaiting the start of the Wirrina Bluegrass Festival the following weekend.  We spent our days sampling the various food outlets – breakfast, lunch and dinner – and the occasional lunch-time wine bar, while spending the rest of our days in search of Adelaide music stores, just for something to do.

On our last day in Adelaide, Ed and I found a shop called Twangcentral, in Gilbert Street, south-west Adelaide. It was not a huge and elaborate marketplace for all things music. In fact it was quite the opposite; one of those plain, very much old-style shops with loads of vintage aroma and reeking of old-world musical charm. It was a small, compact, surprisingly well-stocked shop, offering some of the finest stringed instruments we had ever seen anywhere in Australia.

Twangcentral is run by Terry O’Riley  who has the most amazing collection of vintage acoustic and electric guitars that I have seen in this country.  I have not made searching for vintage instruments a habit in Australia, although, I have been to a great many music shops across the country during my 40+ years of playing guitar and banjo. This for me was a great find. 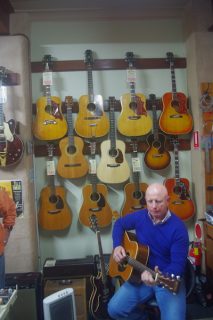 Terry O’Riely with a wealth of vintage guitars.

My music companion Ed Lowe is a banjo and mandolin player. He (from Western Australia) and I (from Queensland) have played together on and off for some years at bluegrass festivals in Australia.  It is worth noting that Ed’s abilities rate in the highly advanced to well-rounded category when it comes to mandolin. Ed owns one of the late John Liddy’s fine “F Style” mandolins. Imagine our surprise when we entered the store to find John Liddy’s first ever commercially released mandolin hanging on the Twangcentral wall – F-Style mando #1.
Ed was beside himself with excitement and itching for pick on this original instrument from one of Australia’s most respected mandolin makers. He was in a state of advanced emotional upheaval and I had to seriously consider administering drugs to calm him down. Terry invited him to have a play on the original Liddy mandolin.

After we had broken Ed’s emotional attachment to the #1 Liddy, Terry kindly invited us to grab our respective instruments and have a pick with him. We headed out to the hire-car and returned with my banjo and Ed’s mandolin post-haste. Terry was in the process of re-stringing a beautiful vintage D18 Martin.  When he’d finished we had a jam together with guitar, banjo and mandolin.

Terry then told us how John Liddy had ventured into the world of luthierie by building his son his fist guitar. After delivering fine piece of work for his son, Terry (John Liddy’s neighbour at the time) greatly encouraged John to continue building and specifically to look at building mandolins.  John continued to build a guitars and many mandolins during his time. No doubt many folk in Australia are glad he did. Liddy mandolins are considered some of the finest in the country today.

We played for another 30 minutes or so when a couple of rock-heads (with their Fender electrics) entered the shop for a chat. Terry apologised to them; he invited them to set their electric guitars down on the floor and noted that we were all busy in acoustic mode right now. 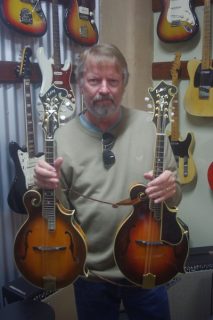 Ed Lowe with his and the first Liddy Mandolin.

Up until that point  Twangcentral had been the most amazing find for us both. We were more than satisfied and prepared to return to our hire-car and head off to the airport to continue our home-ward journey. Terry asked us to wait; he went off to his “vault” – as he called it – and returned with a surprise. We were presented with a Martin D28 – from the 1930’s as I recall. An amazing instrument which was valued at some $140,000. We each had a play on it while Terry told the following story: Noam Pikelny (banjo player for Punch Brothers) had been to the shop the week before us.  He spent time looking around and having a pick on several of the many vintage guitars – including the old Martin that we had seen. Noam was in town for the Adelaide Guitar Festival that week prior.

I could not help be in awe as I looked around the room with a large number of both electric and acoustic instruments hanging on the wall. These were instruments ranging in price from thousands of dollars to many, many thousands. Some of those instruments we had seen – and played – are since being considered for purchase internationally. What a great shop.

Some of the instruments we enjoyed looking at, playing, hearing and drooling over were a:

Thanks for such a warm welcome Terry, and I wish you and the team at Twangcentral all the very best in your future endeavours.

Folks if you are in Adelaide in the near future and play an acoustic or electric instrument then do yourself a favour and head to Twangcentral.