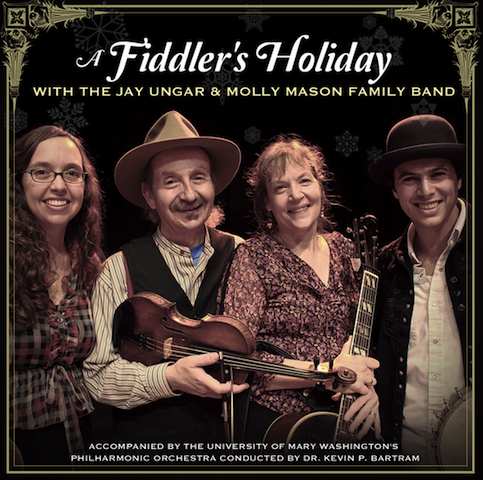 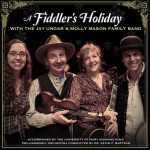 Acclaimed acoustic musicians The Jay Ungar & Molly Mason Family Band will be releasing their live concert album, A Fiddler’s Holiday, on November 20 on Rounder Records. This concert is a musical celebration of the winter holiday season, a time when families gather round hearth and home to keep their spirits warm and bright. The Jay Ungar & Molly Mason Family Band is accompanied by the University of Mary Washington Philharmonic Orchestra conducted by Dr. Kevin P. Bartram.

A Fiddler’s Holiday was video taped at The University Of Mary Washington in historic Fredericksburg, Virginia for a PBS Special that will air on PBS affiliate television stations during the holiday season. The program was produced and directed by four-time Emmy® Award winner Jim Brown. A video teaser of the concert is available here.

Jay Ungar and Molly Mason are best known for “Ashokan Farewell,” the musical centerpiece of the Grammy® Award winning score of The Civil War series, and other frequent collaborations with Ken Burns.

Jay and Molly’s music is best described as American roots music. Jay is regarded as one of America’s finest fiddlers. Molly, known as a consummate accompanist, was the bass player in Garrison Keillor’s Powder Milk Biscuit Band. Their musical career has spanned more than thirty years and taken them from square dances and folk clubs to Tanglewood, Madison Square Garden and the White House. A performing duo in their own right, Ruthy Ungar and her husband Mike Merenda were members of The Mammals.