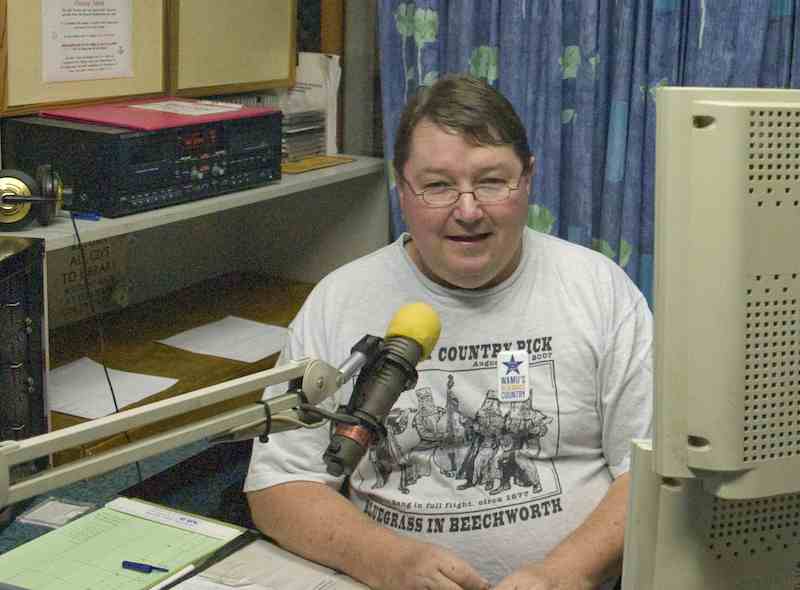 Mike Kear has send us a message saying that this Friday, 4th May he will be broadcasting his 500th Music From Foggy Hollow radio show for the legendary WAMU’s Bluegrass Country.  WAMU is a mainstay of bluegrass broadcasting and has a very large audience from across the globe.  This year, WAMU celebrates 45 years broadcasting bluegrass.    Mike says that he was asked about 10 years ago to produce a show for them for 3 months, but after the first month, they asked him to continue on an ongoing basis, and the show is still going strong there.

For the last fifteen years, Mike has produced a show on Sydney’s Hawkesbury Radio 89.9FM, and the last five hundred shows have been repackaged to three hours and sent to Washington DC to be broadcast five times a week on WAMU’s Digital radio in Washington DC, 2 FM stations in Maryland, the world’s most listened-to online bluegrass station Bluegrass Country.org, and they even have an iPhone app.

A listener wrote once and said he was from Rabbit Hash KY.  Feeling a bit mischievous at the time, when I read the email on air, I said, “you think just because I’m an Aussie I’m ignorant.    There’s no such place as Rabbit Hash.  No one would name a town Rabbit Hash.   You take me for a fool!!”.   Next thing I had listeners trying to convince me that indeed there WAS such a place.  They sent me maps,  photos of themselves outside the Rabbit Hash General Store,  pointed me to web sites – it went on for weeks.  It was a lot of fun.    And all the time I was kidding along that there was no such place and they were trying to make a fool of me.   I said it wasn’t April Fools day.    The more I said I wasn’t going to be taken in by them, the more the listeners tried to convince me that Rabbit Hash did indeed exist.   I looked up some of the web sites they sent me to and I learned that Rabbit Hash Ky was a little town that voted for a hound dog as mayor because they didn’t want a politician!  And they have a bluegrass jam session in the general store on Sunday afternoons.      That’s MY KIND of town, and it’s on my bucket list to go there one day and hopefully join in the jam session, if it’s still going – Mike Kear.

Listeners can hear the show going to air live this Friday at 10pm for FIVE hours on Hawkesbury Radio 89.9FM in Sydney (streamed on the internet at hawkesburyradio.com.au) or hear a three-hour version on WAMU’s Bluegrass Country.org beginning a week later on 12th May.  Mike welcomes emails from listeners even during the show. His email address is  foggyhollow@bluegrass.org.au.