32 Years of Broadcasting for Bill Lawson 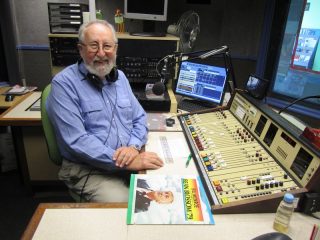 One of South Australia’s longest-serving radio presenters has been recognised by station staff at Mix 101.5FM in Adelaide.

Bluegrass Unlimited, a weekly radio show, now in its thirty-second year of broadcasting is presented by Bill Lawson – now recognised as The Most Legendary Bill Lawson.

Bluegrass Unlimited is our longest-running show by a single presenter. Apart from a few weeks off after a motorcycle accident The Most Legendary Bill has brought bluegrass to the adoring masses for 32 years. It’s a mammoth achievement to present a show week in week out for that long and Radio Adelaide applauds his dedication and commitment to his listeners and the station – Radio Adelaide, 101.5FM.

Bill Lawson recalls the great changes in radio over the period. When he started the program in 1986 on what was then 5UV, the station was on the AM band – when it was established in 1976, the first community radio station in Australia, FM didn’t exist. In 1986 almost all music was on vinyl LPs; CDs were in their infancy and reel-to-reel tape was still in common use. The station had no computers; desktop computers were just starting to make their appearance.

Bill uses all his own recordings, mostly CDs now but he still uses some of the LPs he bought before CDs came in. He still owns the first bluegrass recording he ever bought – The Bluegrass Album (which turned out to be Volume 1 of that great series) from 1980.

Bluegrass itself has changed considerably in that time. Bill tries to cover the spectrum, but while acknowledging the skill and musicianship of some of the contemporary groups like Blue Highway, his personal preference is for the more traditional style.

He continues to play the first generation greats, the foundational bands. Apart from these his own personal favourite bands are the Johnson Mountain Boys, the Seldom Scene, the Lost & Found and latterly the Earls Of Leicester.

There are always people coming to the music for the first time, and you can’t really understand bluegrass without some knowledge of Monroe, Flatt & Scruggs and the Stanley Brothers, to name but a few – Bill Lawson.

After 32 years Bill has no intention of giving radio away, which will please his many listeners, some of whom have been with him from the beginning. He also presents jazz programs on Radio Adelaide and on another community radio station, 5MBS.