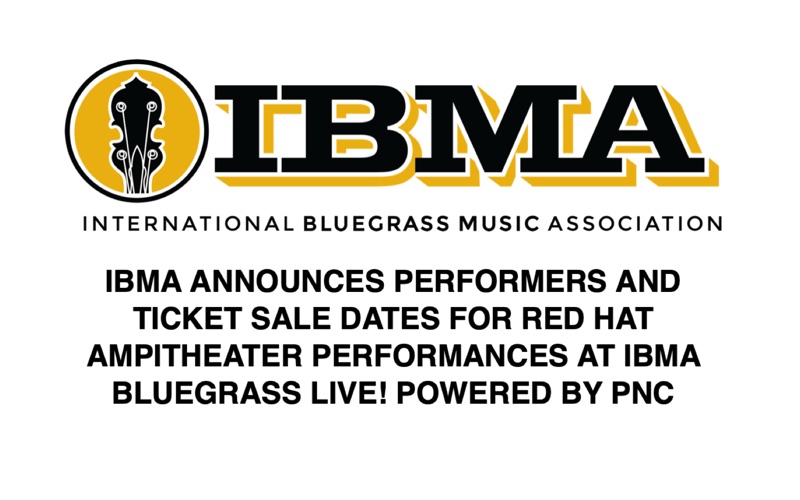 The International Bluegrass Music Association (IBMA) has announced the initial lineup of artists and ticket information for IBMA Bluegrass Live! powered by PNC, a two-day festival at the 2022 IBMA World of Bluegrass®. Tickets for the festival, which will be held Sept. 30-Oct. 1 in Raleigh, N.C., will go on sale to IBMA members April 5 and the general public April 19.

The live weekend performances will take place at Red Hat Amphitheater and on additional stages in downtown Raleigh, North Carolina. Tickets for the Red Hat performances start at just $50US for IBMA members. 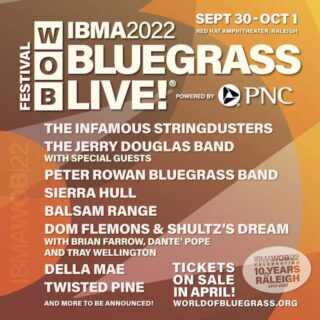 It is wonderful to be getting back to the music in Raleigh, and we are excited to announce the initial lineup of blockbuster performances for this year’s IBMA Bluegrass Live! powered by PNC. The fan experience will be unmatched at this year’s event and we look forward to an exciting week of reuniting with old friends and hearing great music, from award-winning artists to special collaborations with amazing guests. Stay tuned for more exciting announcements – Pat Morris, executive director of IBMA.

As in years past, events during IBMA World of Bluegrass will take place at the Raleigh Convention Center, the Duke Energy Center for the Performing Arts, the Red Hat Amphitheater and at various venues in town.

Raleigh is such a welcoming home for this music, This year’s festival is expected to be bigger and even more joyous than the last. Most of the event is free, and thanks to the support of some great sponsors we’re able to open up the back sections of the amphitheater for free general admission this year. Of course, the best seats are reserved, and will go quickly, but everyone is welcome at this festival – David Brower, festival producer.

Tickets for reserved seating at IBMA Bluegrass Live! powered by PNC will go on sale to IBMA members April 5 and to the general public April 19.

PineCone is the Piedmont Council of Traditional Music. It is a Raleigh-based nonprofit that serves as the official local host and festival producer for IBMA’s World of Bluegrass. It was founded in 1984 by a group of friends looking to preserve, present and promote music and dance that’s rooted in the Piedmont. PineCone hosts year-round events that highlight rich and diverse musical traditions that’ve been passed down informally for generations. There’s more about PineCone’s concerts, jam sessions, workshops, camps, youth programs and weekly radio show at pinecone.org.

Raleigh Convention and Performing Arts Complex is home to four pristine venues in Raleigh, North Carolina. Owned and operated by the City of Raleigh, the Raleigh Convention Center, the Duke Energy Center for the Performing Arts, and Red Hat Amphitheater are located within a two-block radius in the heart of Downtown Raleigh and welcome approximately one million visitors annually. Nearby, the City of Raleigh-owned Coastal Credit Union Music Park at Walnut Creek welcomes roughly 300,000 people each season.

The City of Raleigh is the capital of North Carolina, home to several colleges and universities, with a vibrant performing arts community. Fueled by an impressive mix of education, ingenuity and collaboration, North Carolina’s capital city has become an internationally recognized leader in life science and technology innovation.

Set amongst the backdrop of our Capitol, the Duke Energy Center for the Performing Arts has stood as a historic and cultural focal point in Downtown Raleigh since 1932. It has played host to Broadway classics, rock legends and major political figures while maintaining an emphasis on education of the arts and artists housed within Raleigh’s community. With four separate event spaces available, the breadth and depth of events past, present and future has made this Raleigh’s Premier Arts Venue.