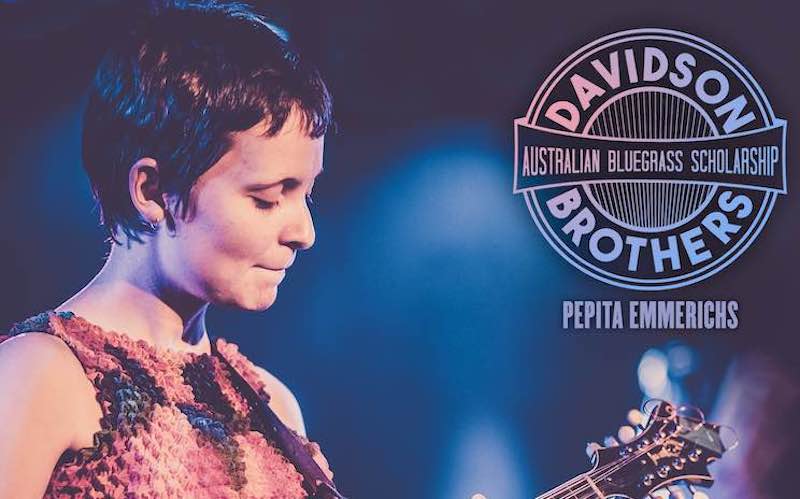 Pepita Emmerichs has been announced as this year’s recipient of the Australian Bluegrass Scholarship.

The Australian Bluegrass Scholarship Award is generously sponsored by City Chiropractic Care is the brainchild of the Davidson Brothers, Lachlan and Hamish.

The award will see Pepita Emmerichs receive a $1,500 cash grant and a day of studio time with Isaac Barter. A further benefit is Hamish and Lachlan Davidson’s commitment to the ongoing mentorship of past and present scholarship recipients. Pepita will also receive a trophy to commemorate her achievement.

Originally a Melbourne girl, Pepita’s primary instruments are fiddle and mandolin, although she loves to dabble with a few other stringed instruments (bass, guitar, bouzouki, cello). Pepita’s exposure to bluegrass music that really got the fire burning was Paul Kelly & Uncle Bill’s ‘Smoke’ album, but she also has a background studying classical and jazz.

Pepita describes touring the world and creating music with her band Oh Pep! as her most beloved musical endeavour. She makes her living as a musician, performing music she is passionate about, and devoting a considerable amount of time to teaching music.

Pepita is currently working on new music with Oh Pep!, Good Guy Hank and Rain of Animals, including an original bluegrass and old time inspired tunes album with the latter. Watch this space.

The Davidson Brothers will host a formal presentation later this year.