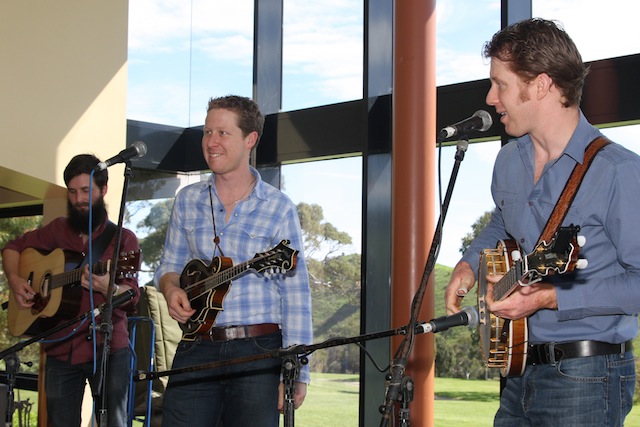 The second Wirrina Bluegrass and Beyond Festival at Wirrina Cove held from  6th to 8th September 2013 was a success, but in different ways to the first festival.

In 2012, the Festival surprised many by the level of local support and interest and the level of audience satisfaction as evident at performances.

The “Bluegrass and Beyond” theme was more evident this year in the styles and material provided by some of the performers. One example was the elegant and eerie harmony work of Saltwater Taffy whose material contained overtones of bluegrass’ Appalachian heritage. Passionfruit Fools, The Adelaide Olde Time String Band, Cal Williams Jr., Andrew Clermont and Nigel Wearne also developed different aspects of the bluegrass back story. It is this linkage that helps enliven the Wirrina festival.

While illness and late personnel changes affected some of the performers, the overall standard seemed a step up from the previous year.

The 2013 festival saw an expanded performers list and more venues. Spread across the five locations at Wirrina Resort some 30 performers gave 83 individual performances or “sessions”. These ranged from open mic events, concert performance, intimate workshops; from busy led sessions by the likes of the Cherry Pickers to blackboard concerts in a marquee.

In 2013 the Sunday gospel and led sessions again proved popular, perhaps because they are entertaining in themselves and because they catered to people of all levels of interest and ability.

There were some standout performances in the Saturday night bluegrass concert. It showcased the brilliance of the multi award-winning internationally acclaimed Davidson Brothers from Victoria. South Australia’s Old South Bluegrass Band showed how harmony and disciplined presentation makes them one of Australia’s most popular bands. In this concert, as in the five others in the Concert Hall, sound was brilliantly handled by Andrew Clermont.

Festival organisers have indicated that in 2014 they will consider arranging for more time and space for jamming and informal activities. Some of the times and venues may be changed to improve acoustics, participation and access.