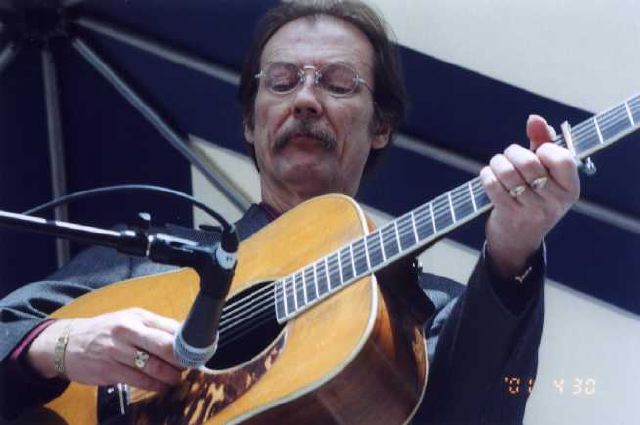 At the 2013 IBMA Awards this year Tony Rice was inducted into the Bluegrass Music Hall of Fame.

Tony Rice spans the range of acoustic music, from straight-ahead bluegrass to jazz-influenced new acoustic music, to songwriter-oriented folk. He is without doubt one of the world’s greatest innovator in acoustic flatpick guitar since Clarence White. Over the course of his career, Tony Rice has played along side J.D. Crowe and the New South, David Grisman (during the formation of “Dawg Music”), led his own groups, collaborated with fellow picker Norman Blake and recorded with his brothers. He has recorded with drums, piano, soprano sax, and with straight-ahead bluegrass instrumentation. You can read more of Rice’s biography on his website and more from Rounder Records his record label.

The New Yorker’s Alec Wilkinson writes a description of that moment when Rice delivered his acceptance speech. See the extract below:

In bluegrass circles, it is being called “The Moment,” and some of the people who saw it wept. I heard about it from Gillian Welch. It involved the master guitar player Tony Rice, who was giving a speech late last month in Raleigh, North Carolina, on the occasion of being inducted into the International Bluegrass Music Association Hall of Fame. Rice, who is sixty-one, is a revered figure in bluegrass. Following the path of his own hero, Clarence White, he established the guitar as a lead instrument in bluegrass, the way Charlie Christian helped the guitar step from the rhythm section in jazz. An admirer of Coltrane and Jascha Heifetz, he played percussive, blues-inflected lines that found unexpected, and sometimes startling, trails through the chord changes. The way certain singers enunciate clearly, so that every word is heard, Rice played with a deep technical command, so that no note was ever lost. He released his first record in 1973, and the shadow of his articulate and forceful style falls across the playing of nearly all other bluegrass guitarists. If you play bluegrass guitar, you have to come to terms with Rice the way portrait photographers have to come to terms with Avedon… Alec Wilkinson.