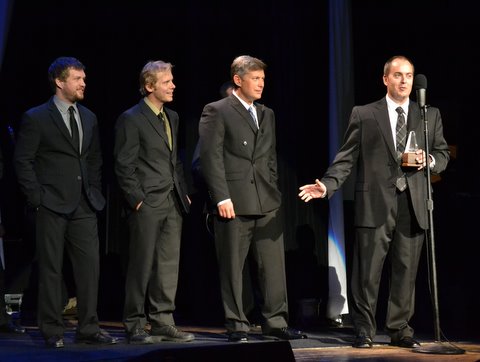 The 22nd IBMA World of Bluegrass was last week.  The event opened with a business style conference, which ran through to Thursday, 29th Sep., the day of the much-anticipated IBMA awards.  The list of award recipients listed here last week.

Ted Lehmann was at the IBMA week and reports on the range of events on his highly informative blog – Ted Lehmann’s Bluegrass, Books, and Brainstorms. As always there is a great collection of photos on the blog as well. Thanks Ted.

…IBMA Fan Fest then kicks in on Friday and runs through Sunday morning.  This year, access to all events was made easier and ala carte pricing made the entire week less pricey for those who wanted to enjoy specific portions of the schedule. The music pass, now in its second year, proved to be a boon for people who wanted to hear bands in a variety of settings. Making Wednesday a free day for attending the Trade Show increased traffic there and was popular.  By bringing all official events into the Convention Center, IBMA made jamming sites more visible and jammers took advantage of this long into the evening.  While we hardly got over to the hotel, I understand there was plenty of jamming there, although much of it was in suites and hotel rooms, not necessarily open or widely advertised.  Enthusiasm for all elements of the week was high, and I’ll have more to say as I roll out comments during the coming days. Now…on to the Awards presentations – Ted Lehmann.

Read the full story on the Ted Lehmann Blog.