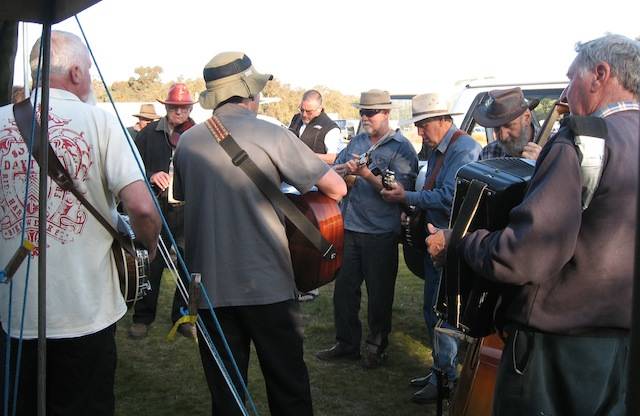 The Guildford Banjo Jamboree is all about the most joyful of all musical instruments, the banjo. No less that 12 workshops were held, ranging from the banjo ukulele, banjo mandolin, Irish tenor to claw-hammer and bluegrass banjo. All workshops were well attended.

The Saturday night bush dance in the public hall is always a great attraction, as are the blackboard concerts in the music hall.

Victoria’s West Gippsland region was well represented at the Saturday night blackboard concert by the “Bunyip Bluegrass Jammers”. There were eleven of them on stage led by Steve Jackson and Robert Montgomery.

The mass banjo photo shoot under the big tree (a more than 500-year-old red river gum) was a sight to behold, with Mick Coates leading the charge with “Folsom Prison Blues”. The Robbie Watts banjo pick-off  was also a big crowd-pleaser. The open award was won by Brayden Ryan with a blistering performance. At only 20 Brayden has now won the Robbie Watts award three times. For the first time an under 18 youth award was included as part of the Robbie Watts banjo pick-off. The Youth Award was won by Connor Young, an eleven year old with a passion for bluegrass banjo. The audience loved it. Congratulations Connor.

The Sunday Gospel singing on the banks of the Lodden River with “Dancing with the Angels” led by Bruce Sedawie was one of the highlights of the festival.

I would like to mention that the performers, MCs, dance callers etc. give their time for just a weekend pass and they still have performers clamoring to play. This creates a great atmosphere of sharing, with experienceed players sitting in the street jamming with the youngsters or those less experienced.

The Guildford community is highly supportive of the annual Jamboree. In turn the community is helped each year with some festival funds for various projects. The addition this year of the new toilet and shower block was much appreciated by all.

So to sum up the Guildford Banjo Jamboree 2011 was a huge success, blessed with glorious weather for the whole weekend.