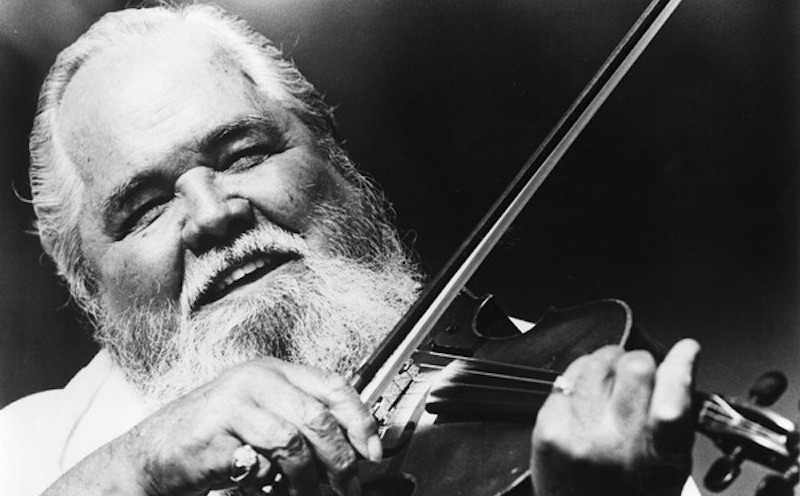 Here is the fiddle master himself with his famous tune Orange Blossom Special. This concert was held in Florida at the Gateway College in Feb 1990. He is supported by Skip Johns and the Travelers also from Lake City, Florida.

Born in Lake City Florida, Chubby Wise was a hugely influential, bluegrass and country music fiddle player. His father was a fiddler and Chubby backed him with guitar and banjo until the age of 15 when he started playing the fiddle himself.

Chubby then moved to Jacksonville, Florida where he drove a cab during the day and played the fiddle at night.  It was in Jacksonville that he and his close friend, Ervin Rouse, were inspired to write the most famous fiddle tune of all Orange Blossom Special.

In 1942 Chubby became a member of Bill Monroe’s Bluegrass Boys and by the following year was enrolled as a member of Grand Ole’ Opry.

During the 1950’s he worked with a variety of bluegrass and country music bands and in 1954 he became a member of Hank Snow’s Rainbow Ranch Boys until around 1970 when he started as a freelance fiddler.

Chubby Wise was in demand through many recording sessions with a wide variety of singers and bands playing not only bluegrass and country music but also western swing. Chubby left behind many great recordings when he died at the age of 80 on 6th January, 1996.

Chubby Wise was inducted into The National Fiddler Hall of Fame in 2011.